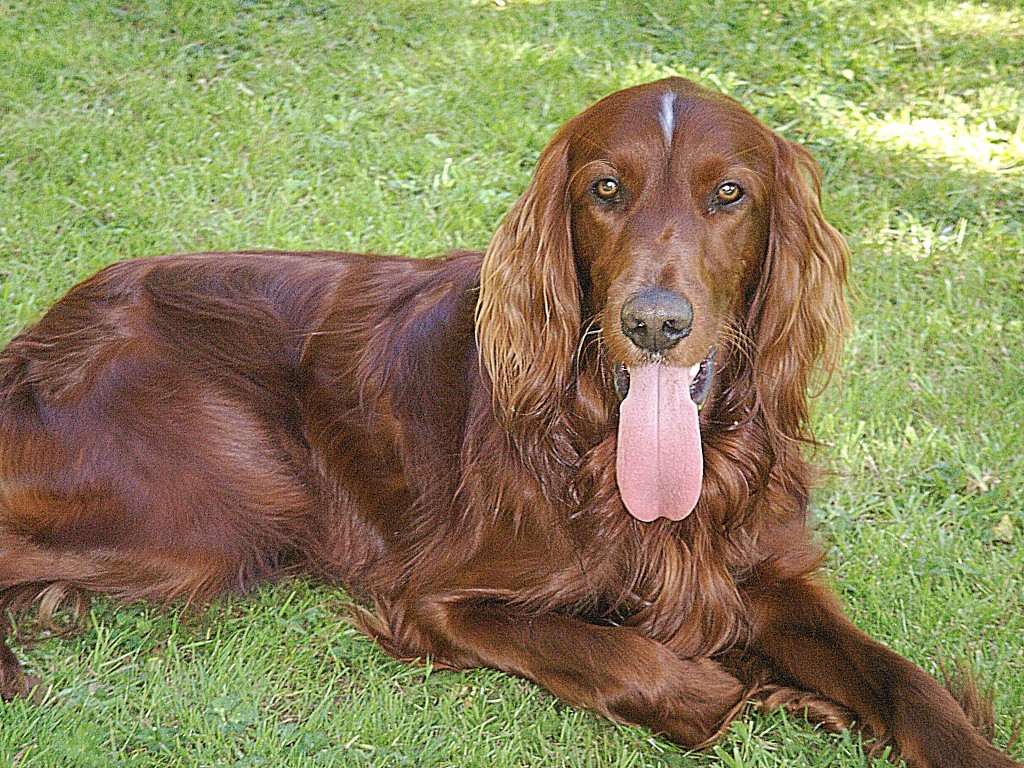 Just over 7 years ago I got an email that was about to change our life.

Someone had a 10-month-old Irish Red Setter that they wanted to re-home. They wanted him gone that night. A quick phone call to my husband and 4 hours later I was on my way to see the dog.

When I arrived at the house this beautiful, underweight and very dirty Red Setter came bounding up to greet me. He had the most adorable big brown eyes, albeit a bit sad looking.

I noticed a kennel at the side of the house along with 2 empty rusty bowls. In the garden there was a bike and a football, and a young boy around 8 years of age playing in the garden, taking no notice of the dog at all.

As I went into the house the dog was pushed back outside as he tried to follow me into the house. It soon became apparent that this couple no longer wanted the dog. I learned that he lived outside 24/7. I glanced at the window and this beautiful face was looking at me through the window. I think it was at that moment he captured my heart.

I asked if the dog who was called Copper could come in – I didn’t really want to make any decisions without spending a bit of time with him – but in my heart I knew I would not be leaving this house without him that night.

They let Copper in and he ran straight over to me, the boy got up and came over towards Copper, I saw a look of fear in his eyes and I am sure he pressed in closer to me.

I held small talk with this couple who I took a dislike to, it was obvious that they had no time for Copper admitting that they both worked and simply “didn’t have any time for him” they went on that Copper was “full on” and “always got in the way” and half an hour later I was walking away with Copper by my side.

Copper didn’t have anything to bring with him, no toys, no bed, not even a blanket, and not even a collar and lead. The only thing we did leave with was his Kennel Club Certificate – his official name was Rusty Prince.

This little fellow had been through enough in his short 10 months, so we decided not to confuse him any more and we kept his name Copper.

The next morning we took him to the vet for a check up, the vet told us he was very underweight and gave us tips on how to build him up. The vet gave him his immunisations, which he really did not like having done.

The love and affection he gave us immediately was just heart busting, it was almost as if he was trying so hard to show us what he thought of us.

It soon became apparent that he had a fear of boys around 8 or 9 years of age, especially those on bikes and with footballs, I think seeing him so frightened of these two things his previous owners boy certainly was not a “dogs best friend”

Copper started to chew the end of his tail, it was bleeding and so we took another trip to the vets; this vet said it could possibly be anxiety – and possibly down to his previous home. But the vet was delighted with his weight and the condition his coat was in.

Slowly Copper stopped chewing his tail, he continued to thrive and become very much part of our family. Everyone just loved Copper.

For a dog who had lived outside 24/7 he adapted so very well to living indoors, loving his big bed in front of the radiator, a bowl of fresh food twice a day, and toys all around the house. He never once did any damage in the house, we have been so lucky with him.

One Saturday morning when we had him just over a year he became very unwell, so poorly that I really worried that it was something serious. The trip to the vet kept him in for 3 nights, the house was silent and sad – we all missed having Copper around.

The vet diagnosed severe tonsillitis and they were removed, the vet telling us that it was uncommon in Red Setters. Copper recovered well and was soon back to his normal bouncy lovable self.

Copper is perfect in every way, gentle, lovable and extremely friendly, until it comes to seeing the vet and then he becomes uncontrollable. This goes back to his first visit when the vet gave him a kennel cough vaccine up his nose. He didn’t like it one bit and never forgot it either. Just like the bike and the football.

So every year when we have his vaccines done we have to get Copper put out to enable us to get them all done. So when this is done we ask the vet to give him a good all over check up.

Last year I suspected that Copper was limping a bit so told the vet, he said whilst he was under, he would x-ray him. He told us to collect him around 5.00 pm.

I will never forget that day; I was just about to go out shopping when the vet phoned. He asked me if Copper had ever been a gun dog, I said “no”, he replied, “I was sure he wasn’t”

He went on to say that Copper at some point in his life before we got him, had been shot. I felt sick I couldn’t take in what the vet was telling me.

The vet said for us to go straight down and he would explain more. My husband and I drove to the vets in silence; shocked at the news we had just been given.

Just when we thought it couldn’t get any worse the vet put up his x-rays to show us; at first I couldn’t work it out – the vet explained that when he was doing the x-ray he thought the machine was faulty – he even changed the lens on the machine, but there was nothing wrong with the machine, in fact what it showed were 60-70 pellets inside Copper – all through his body. The vet said that he and his fellow vets could not believe it.

The vet went on to say that Copper would have been shot at close range and would have been badly wounded and in a lot of pain when it happened. I felt physically sick. I could not believe how someone could do this to such a lovely dog, one that just wanted to love and to be loved and at the time he would have just been a puppy. My boy at this stage was anxious to get out of the vets and get back home again, unaware of what we had just discovered.

I asked the vet what could be done, He said that Copper didn’t seem to have any ill effects from this, and there were far too many pellets in his tiny body to take out.

So, we went home, both my husband and I felt sick for days after, shocked at what he must have gone through, and angry, oh so angry that someone could have done this to such a beautiful dog.

We do believe had we not taken Copper on that night that he would not still be here now. As it is we have the most perfect, beautiful, affectionate and adorable dog that anyone could wish for.

Anyone who has been lucky enough to have met Copper, has instantly fallen in love with him.

How pleased am I to have received that email. 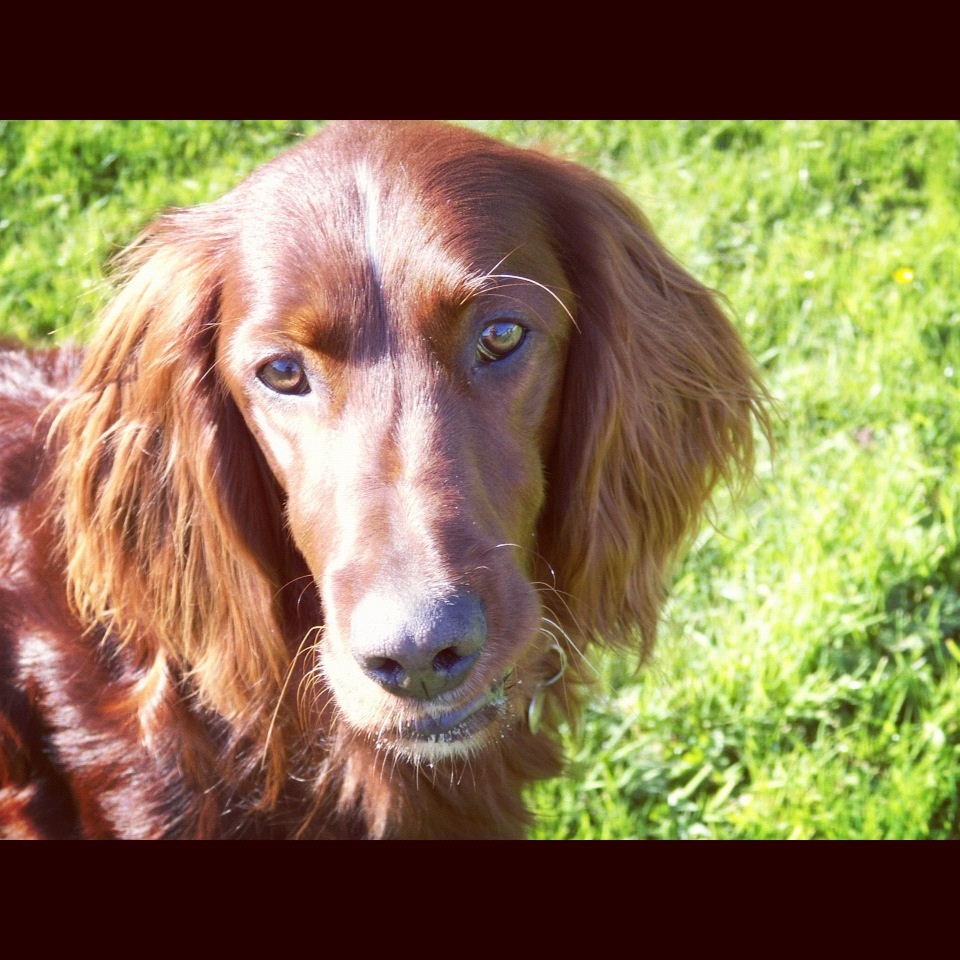 To view pedigree click below button and then enter pedigree dogs name in the “Enter the name, or partial name, of the dog to search for” section  then click “Search Now” at bottom of page